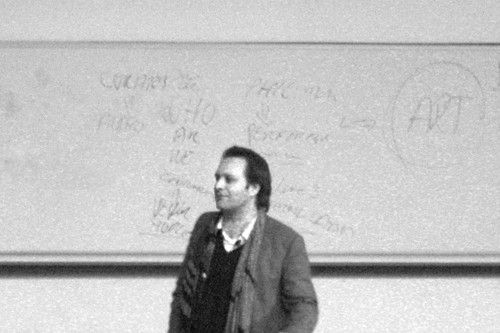 
DANIEL BIRNBAUM – @CBS
This week, well-known director of Städelschule in Franfurt and the curator of last year’s Venice Biennale, Daniel Birnbaum visited CBS (Copenhagen Business School). Most of his undertakings in the art world could be said to have a managerial dimension, and so he gave a lecture on art and management. Generally he advocates the possibility of a new curatorial turn – an enterprise combining fields otherwise separated and thereby presenting theoretical thinking with a more potential space.


On account of the 53rd Venice Biennale, but also given your success with Portikus, and the Städelschule in Frankfurt, I would like to ask you: “What does it take to make a world on your own?”
I don’t know if anyone ever makes a world of their own. The material with which we build artistic, or scientific worlds tends to be things we share with others. Language, for instance, doesn’t really make sense if spoken by only one person.

To recollect Wittgenstein’s argument against the possibility of a private language; any given code, is it to work as such, involves a decoding, a translation on behalf of the receiver.
That’s true, and yet we do recognize the specific tone of almost any artist. If you see an Edvard Munch painting, the idea of oil on canvas, or perhaps expressionism, or even the comprehension of Nordic melancholia, is something many people share. But, when you see it you still know it’s a Munch-painting. To me, this proves that there is a world, which is specific to Edvard Munch, hence other worlds specific to other artists. I guess that’s the reason why many of us are so interested in art, this mysterious thing. Art theorist and philosophers have tried to explain what it is, so I don’t think I’ll be able to add much here in this interview, but I do insist on the possibility of identifying such individual artistic traces.

This lecture was about…well, let’s call it the creative managerial momentum of curating; you, as a curator might have certain, perhaps, philosophical thoughts, which the artists might not have producing their works, and on account of these ideas you deploy the exhibition as a format. Is this another world?
A curator is not really an artist, but something else. So the question must be; is there also some unmistakeable curatorial signature. I’m not sure there is, at least not in my case. I believe my approach to the whole world of exhibition making is very much about being an accomplice; someone who helps artist to create the works they want to do. Perhaps, in some cases, I might be able to push the artist a little further than he, or she would otherwise have been able to at that moment.

According to Michel Foucault – at least in my understanding – “power” is a kind of original creative force, always charging history and its subjects with differences. What does it mean for you to be such a powerful actant on the international art scene?
I think the only kind of power that is interesting in the art world, if “power” even is the right word, is the possibility to make interesting things happen. The moment you abuse any power that you might have, it will be visible not least to your self. It will be something you feel ashamed of, and it produces nothing of interest. So, in the world of curatorship it’s only about making things visible, which are actually produced by others.

I believe “power” is not only a moral concept, something you either use or abuse; it’s also a quasi-ontological drive, sort of equivalent to Derrida’s concept of ‘différance’. Power is what makes the world happen. You, for instance, selected some artists for the Venice biennale, and of course this doesn’t mean that you deliberately suppressed everyone else. But, at least you didn’t show them, and therefore they became a little less visible, relatively speaking.
If I can be effective in the sense that I create difference, it might be an interesting thing. I do think there is a slightly tiring tendency in today’s cultural production, not only in the arts; a homogenization of space, of artistic, or whatever cultural expression. So, the production of spatial possibilities, and the insistence on difference is something I believe is a good thing for a curator to maintain.

How do you look upon the, perhaps, somewhat existentialistic sounding term “responsibility”?
I guess an artist is only responsible for his, or her, own artistic intuition. And in the world of exhibitions and teaching, responsibility only adds up to, as I just said, attention to new possibilities, not becoming deaf and blind to alternative versions.

What is the common denominator between the director, teacher, author and curator “Daniel Birnbaum”?
I now do so many different things that I really don’t know. But one thing is certain; I wouldn’t say that I’m still a critic, not in the traditional sense. I’ve tended to avoid that. You know, in a way a critic is a part of the audience. He, or she, is sort of an ideal beholder, someone sophisticated and subtle enough to understand art, and communicate it to others. Being a curator, I guess you’re more kind of back-stage. Anyway, that’s where I find myself after many years of critical activities.

I also mentioned your role as an author.
Yes, and that’s of course something quite different from the critic. In a way, I go in and out of roles, but I do stick to the same basic interests, both in my intellectual life, and in enterprises more artistic. I guess you could say that it’s just the nature of the audience that differs, depending on whether it’s an exhibition I’m making, a lecture I’m giving, or whatever. But it doesn’t mean a change of content, but rather of the approach.

So, what is that main interest or content?
I’m attracted to the world of art because it seems one of the most open spaces when it comes to renegotiating the role of culture at large. The only other world that I know very well is a stricter philosophical, academic one, and that is far more specialized. The art world can be silly and superficial, but it also allows for great sophistication, and I think that’s the fascinating thing about it.

What could possibly be the future relation between art and theory?
Well, I don’t think there will be a big change when it comes to art’s relation to theory. Theoretical reflection tends to be something that happens afterwards, there’s a certain “nachträglichkeit” to it, using Freud’s term. And if you work at an art school you very well know that theory is not there to control, or to correct art, but only as another tool. Theories simply allows artists to get a better grasp of the world they are navigating, and, perhaps, also a better grasp of what they’re trying to do.

What if I put “economics” or perhaps “management” instead of “theory”?
We are, of course, here at the business school talking about art, theory and culture from a kind of managerial point of view. But, as an educator, I would say that whether it be theory or managerial skills, they’re only around so that nothing hinders, or in any way stops the young artists from producing what ever it is they want to produce. Those concepts are just to navigate the landscape in a more efficient way.

Is there something, an exhibition, a book, or whatever, you would really like to do, and which you haven’t already done?
I’m sure there’re many books, but I still don’t know which ones. In recent years, I’ve been involved with some very large projects, and naturally a great deal of compromising comes as a part of this. Running a school is actually very much about keeping everybody happy, productive and enthusiastic, and so you tend to forget your own interests, at least in part. And doing a large exhibition, like the Venice biennale, obviously involves compromises too; there are so many artists who would like to do things that are just not practically, or financially, possible. I don’t regret any of this, but I do have to say that lately it has been a lot about compromises, whereas acting as a writer you’re totally free to write whatever you want. There’re several artists, themes and subject matters that I’m interested in, and I can’t really list them all. But I would definitely be interested in writing something on Öyvind Fahlström. He is not particular underrated as an artist, or anything – people are interested in his work – but there isn’t that much intelligent writing on him.